Its that time of year again! My favorite hunting season. Minnesota pheasant hunting opened up on Saturday, and boy am I excited to get back out into the fields. My work schedule didn’t allow me to hit the corn and bean fields on opener, but you can bet I’ll be out there this week! In the meantime, I was clearing out the freezer of the last of last years vacuum packed breasts, and here’s a nice little recipe I cooked up. Hope you enjoy!

Roast Broccoli
-one head of broccoli
-three to six cloves of garlic (or a huge heaping spoonful of minced garlic)
-small hot pepper (I used a Thai pepper, but any spicy pepper will work)
-olive oil
-lemon

Mashed Potatoes
-3 lbs of yellow potatoes
-the rest of the bulb of garlic
-cheese (I used a leftover bag of shredded cheese, but whatever cheese you have lying around works)
-also, Parmesan cheese
-Greek yogurt
-some fresh minced green herbs (chives and thyme were what I had on hand, basil, oregano, sage, cilantro or parsley are all good choices too)
-beer 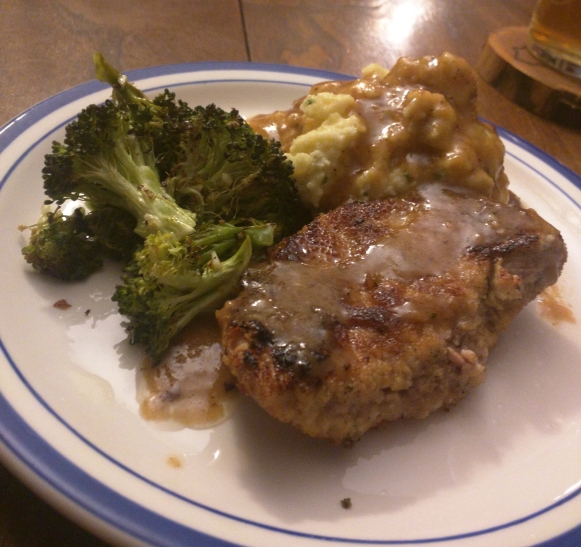 Get this dinner kicked off by giving your potatoes a little scrub, quartering them, and tossing em into a big pot to boil. Liberally salt the pot, turn it up to high, and leave it be. We’ll come back to that in a minute.

Grab your breasted pheasant and a sharp knife. Work your knife along the center of the breast bone, making a cut straight down the middle of the pheasant, dividing it into two halves. Guiding the knife along the rib cage, slowly work each breast off of the bones. This should leave you with four boneless pheasant breasts, two from each pheasant, and a couple of loose pieces of trimmed meat.

Salt and pepper the breasts and let them rest for a few minutes. Now is the time to hit them with any dry seasoning you like. I’ll often use cayenne here, Italian seasoning, turmeric, paprika, garlic powder, or cumin, basically whatever flavor I’m in the mood for. This particular night, I stuck with just salt and pepper, which is a good place to start from, and then experiment with some more flavor the next time you prepare it.

While the pheasant is resting, pop the oven on 375 degrees to get it nice and hot. Grab your head of broccoli and get to chopping. I like my broccoli with minimal stem, and in bite sized pieces (primarily because the smaller pieces cook faster), but chop it up however you like.

Toss the chopped broccoli into a bowl and chop up a couple of your cloves of garlic. Toss those into the bowl as well. Now is the time to chop up the hot pepper and toss it in too. This is optional though. If you are not a spicy food eater, skip that ingredient.

Coat the broccoli and garlic liberally with olive oil. Hit with a healthy amount of salt and pepper. And toss or stir to make sure each piece is coated evenly. Once that is accomplished, spread the whole mix onto a baking sheet and slide it into the oven.

By now your potatoes should be nice and soft. You should be able to push the tines of a fork through them with no resistance. Strain the potatoes, reserving a quarter cup of the water, and transfer them to a bowl.

Immediately hit the hot potatoes with a half a stick of butter, cut into smaller chunks. Follow that up with whatever cheese you were planning on adding into the taters. We want both the cheese and butter to start melting.

Now is a great time to mince your herbs and remaining garlic and toss them into the potatoes, followed by any other seasonings you’re thinking of. Don’t forget to salt and pepper! Be easy with the salt at this point. Remember we salted the potatoes’ water too, don’t want to over do it.

With most of the ingredients added, start mashing up those taters. A potato masher is a great tool for this, but a large spoon or fork works fine too. Just don’t use you’re hands, those potatoes are still steaming hot!

While you’re mashing those potatoes up, start adding the yogurt and a little of the reserved potato water. Both of these ingredients are added to taste and texture. I prefer about 3 hefty table spoons of yogurt, and the entire quarter cup of water because I like a creamy textured mash potato with this dish. If you’re in the mood for more of a smashed potato, go easy on the mashing, light on the yogurt and skip adding the water back in.

Back to the pheasant! Get your frying pan out, and stove top fired up. I am usually going for medium high heat to fry a thin, breaded poultry breast. While your pan is heating up, prepare your frying station.

You’ll need a bowl for the egg wash. And a bowl for the breading. Crack your egg into one bowl, add about two tablespoons of water (I get it direct from the faucet, so I’ve never measured), and scramble. Fill your other bowl about halfway with Italian breadcrumbs and mix in a small handful of flour, whisk with a fork to distribute evenly.

Coat your pan with olive oil, or really, any oil of your choice. I actually used rendered pork fat for this one. Once your pan is nice and hot, start breading your breasts. (Pro tip – get your fingers wet under the faucet, and splash a little water onto your pan, if it sizzles and pops, its hot enough)

Drop the breasts one at a time into the egg wash, and flip to coat evenly. Dredge them through the breading, again to get an even covering and plop them into the fry pan. If its not sizzling on contact, let your pan heat up a bit more, or turn your heat up a little.

Once your breasts are browned nicely on both sides, remove them to a plate covered with a paper towel. You should be checking on your broccoli by now to make sure its not burning! If it looks blackened on the tips, its time for it to come out. Let that rest on the stove top while you’re finishing up.

Take the other half stick of butter that you didn’t use to make your potatoes delicious and throw it into the frying pan, still on medium high heat. Follow that up with a large pinch of flour. You’re making gravy! Stir vigorously to combine. As soon as the flour and butter combine, and start browning, crack a beer. Make sure to drink some of the beer, because beer is delicious. Add about half of that beer, in slow pours, to the butter and flour, continuing to stir vigorously. If it looks like you have gravy in your pan, mission accomplished and you’re done cooking!

Grab a plate, add the pheasant, a pile of potatoes, and a handful of broccoli. Quarter the lemon that you forgot I told you you needed, and squeeze it over the broccoli and pheasant, you’ll thank me later. Top the pheasant and potatoes with gravy. Find a fork. Try not to eat the entire thing before you get to the table! This makes enough for two hearty eaters, we didn’t have much for leftovers in my house. Or it can be stretched to serve four, particularly if you use a whole 5 lb bag of potatoes, rather than my recommended amount of 3.

I'm an avid hunter, fisher and forager. I love all things food. My mother taught me to cook, my father taught me to fish, and I taught myself to hunt. Foraging is something I make my girlfriend do because she likes walks in the woods, and I'm against walking unless there is a purpose behind it. I'm not that good at any of these things, but hopefully my trials and tribulations will help you along your own personal journey! View all posts by IntoTheNorthWoods